NASA’s James Webb Space Telescope new images have been released that are the deepest and sharpest infrared images of the distant universe to this date. On July 11, 2022, history was made as the very first science image from the James Webb Space Telescope was unveiled to the world. Upon its release, it immediately broke the cosmic record for the deepest view ever taken of the Universe. 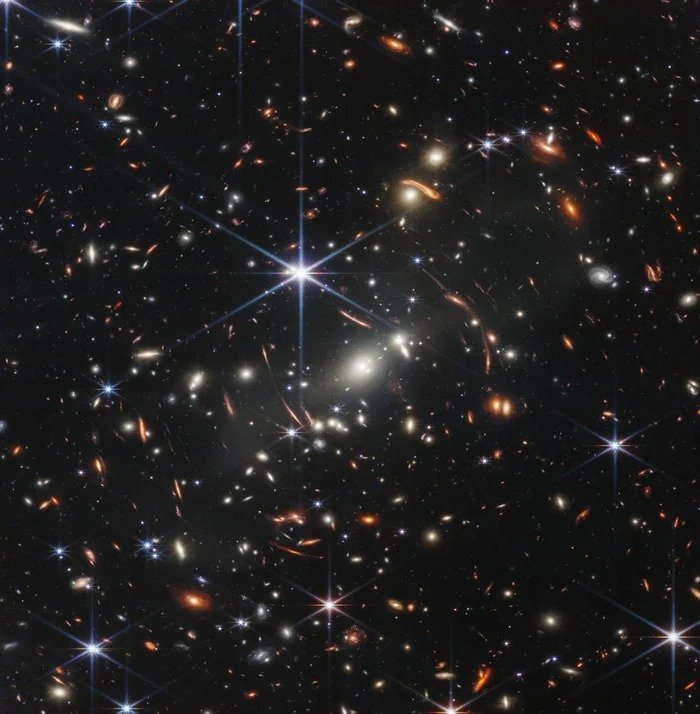 This record had previously been held by the Hubble Space Telescope, which first set the record back in the mid-90s with the original Hubble deep field, and which broke its own record numerous times over the years.

When comparing Webb’s first image to similar images taken by Hubble of the same patch of sky, however, you can see just how much more detail Webb’s camera is capable of capturing. So what are we actually seeing in this new Deep field image? And How much more is it revealing of the universe?

Before we get stuck in comparing the images, let’s first get a basic overview of how each of the telescopes differs. Because their capabilities are not identical. Webb often gets called the replacement for Hubble, but NASA prefers to call it its successor.

Webb will primarily look at the Universe in the infrared, while Hubble studies it primarily at optical and ultraviolet wavelengths, though it also does have some infrared capability as well. Both Webb and Hubble are reflecting telescopes that conceptually work the same. Light reflects off a large primary mirror onto a secondary mirror, which sends it back through a hole in the primary mirror and into science instruments for analysis.

Hubble’s mirror is 2.4 meters wide, which is 7.9 feet wide, whereas Webb’s segmented honeycomb-shaped mirror is an enormous 6.5 meters across, which is 21.3 feet across. Webb has the largest mirror ever flown in space. Its 18 segments are made out of lightweight beryllium and coated with a thin layer of gold, making it much more sensitive to infrared light, allowing it to peer farther back into time than Hubble is ever capable of doing.

The two telescopes also have very different cooling requirements and are in very different positions. Hubble is in orbit around the Earth, while Webb views the universe from 1.5 million kilometers away, which is about 1 million miles away. A location called the second Lagrange point.

Let’s have a look at the images, and straight away, you can see how the greater capabilities of Webb have allowed for a much more detailed view of the universe. Each photo is of the galaxy cluster called SMACS 0723, which is located 4.6 billion light-years away. 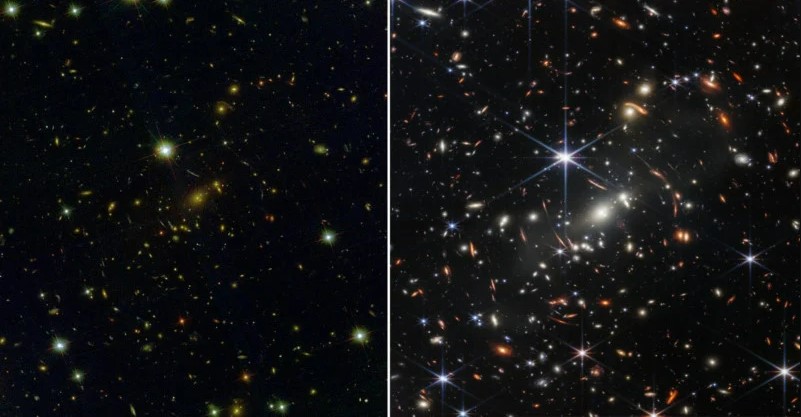 This is why some of the light from those distant objects seem curved and warped. NASA says that the light that Webb senses is more than 13 billion years old, which means the galaxies in the background were formed just a few hundred thousand years after the Big Bang.

For the first time, we can see some of the faintest objects ever observed in the infrared and what is incredible is that this photo only covers a patch of sky approximately the size of a grain of sand held at arm’s length by someone on the ground. Compared to Hubble’s view of the same area, Webb has brought those distant galaxies into sharp focus.

Many objects that appeared as faint smudges to Hubble now can be seen in crisp view. Because Webb peered so far into space to capture this magnificent image, it was able to observe distant light that’s been travelling across the cosmos for billions of years. As a result, closer galaxies are seen in the cluster, SMACS 0723 appear as they would have 4.6 billion years ago. 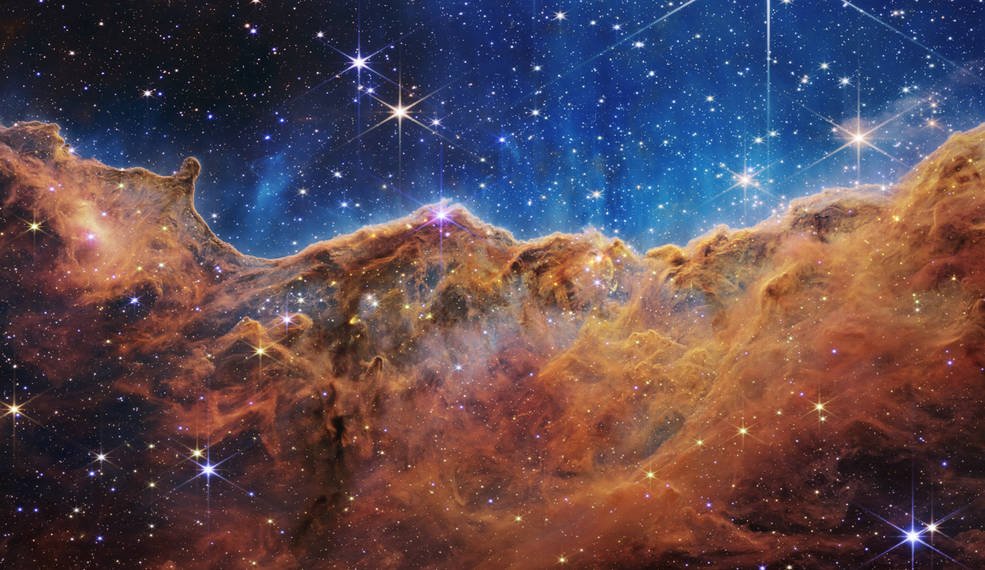 This photo is just one of five that are being released, offering our tiny blue planet a glimpse into the distant past. In the coming years, Webb will no doubt build on the legacy of Hubble, allowing us to see deeper into space than ever before.

Although the best is yet to come, each new observation, especially at this early stage, reveals a brand-new age in a 13.8-billion-year-old cosmic story. The universe will never be the same again.